Ganesha is the lord of beginnings.Yes, I remember the beginning of the story where Ganga asked the man not to question her decisions. I included a similar concept in one of my stories. Wow Ganga, agreed to give birth to eight celestial spirits to free the 8 vases. What I don’t like about this part is that what did Ganga expect? I think she expected too much from her husband because who wouldn’t be curious as to why they’re killing their babies? I wish Ganga would have been more considerate towards her husband by giving him some explanation at least. When Ganga returned, I don’t get why he was so happy when she walked away from their marriage so easily. That’s a Dumb move Ganga. Why did the king take forever to find another woman? It just so happened that he fell in love with someone else after Ganga appeared. Was he waiting for her return? He’s a king so he would have access to so many other women. Could it be perhaps that she’s a goddess and that he didn’t want a normal woman? But that wouldn’t make sense as to why he fell in love with a fisherman’s daughter, Satyavati. 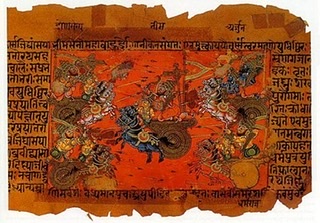 Manuscript illustration of the Battle of Kurukshetra
Source: Wiki
Posted by April May June at 4:09 PM