Update: I revised my intro because after looking back at it in the later weeks, I felt like I went too deep in my persona analysis. Also, I don’t think I did a very good job of telling you all about myself.

My name is April Lopez. I’m half Filipino and half Puerto Rican. I was born in Lawton, OK but was raised in Junction City, KS. I’m currently in my third year of college, majoring in Biochemistry.

My hobbies include staying fit and watching anime. Right now, my personal best for squatting is 155 pounds which I never thought I could do considering where I started. For my 21st birthday, my dad bought me my very first belt so now I’m always pumped to do squats! The picture below shows my first time using the belt and it felt amazing. 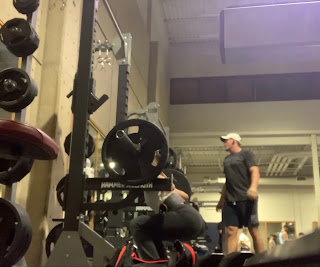 To dive a little deeper into my history, I always felt weak so one day, I decided to change that. Initially, I went on a fitness journey to look good. I wanted to have a butt as soon as I could. I always felt bad when I couldn’t go to the gym. After going through this journey for some time, I’ve learned to accept the state that I’m in currently and to be consistent. Since I was young, my dad has been one of my biggest inspirations when it came to health and fitness. My dad used to be a body builder back in the day so I ask him for help when I need it. When I was starting out in the weight lifting room, my dad showed me helpful exercises and proper form so I owe it all to him. There’s something about being able to lift weights that’s empowering.

Interestingly, I started playing the cello in the sixth grade by joining the school orchestra. My initial interest for the cello and orchestra deepened into a lifetime passion so I continued playing up until college. During my sophomore year, I joined OU’s Civic Orchestra where I met such talented musicians. I do have to say that joining the civic was extremely intimidating at first. The music was beautiful yet difficult. When we sight read, I had zero clue how to play any of it yet, many of the other players were doing a fantastic job at sight reading (sight reading is my weakness). I love playing so much that I decided to continue with my Piano II class this semester.

The last aspect that I should address is my love of anime. I’ve been watching anime since I was in elementary school. Seeing anime blow up on social media makes me happy yet a little defensive just because it wasn’t it “cool”  back then. I remember when my classmates thought it was weird when I brought manga to school too. Twitter wants to say that people who liked anime before were bullied because they did the famous “Naruto run” but to be honest, I never did. Do I want a cookie? Yes, I would love a cookie, thanks. Besides, I think people thought I was weird because of my vampire obsession. You can bet that I was obsessed with Vampire Knight! *cringe*

Anyway, some of my favorite older animes are Cowboy Bebop, Inuyasha, Death Note, and the Melancholy of Haruhi Suzumiya. Some newer anime that I’ve watched and actually enjoyed are Demon Slayer and My Hero Academia which are super mainstream; both of them are extremely good so I understand why they’re mainstream. To be completely honest, My Hero Academia was the first anime to make me ugly cry; it was the fight scene between All Might and All For One. Seeing All Might be pushed into his weaker state yet still fight completely broke my heart. While I watched the episode, I was sitting in the Union as waterfalls was streamed from my eyes.

Alright guys, that’s it! I hope this updated intro gave you a better understanding of who I am as a person.