The Women of Hercules
This storybook contains the perspective of different women that have encountered the mighty demigod, Hercules. Overall, this storybook is about Greek mythology and it’s a topic that I’ve had a long history with. I absolutely love learning about Greek mythology and I wish there were more movies about it. More specifically, I was aware of Hercules but primarily from the Disney movie, Hercules. The story is formatted as a conversation and the setting is a talk show. Three women, Alcmene, Deianira, and Hippolyta were all featured on the show where they gave their side of the story from their encounter with Hercules. While the writer did add some changes the actual story, I actually  did not know about their individual stories. I had no idea that Alcmene was the mother of Hercules or that Hippolyta was the Queen of the Amazons. In fact, I have never heard of these names before today. I enjoyed reading the dialogue and the content was indeed interesting. The writer did a great job of being creative and keeping the reader’s attention. I also enjoyed the format and the color scheme of this writer’s blog.

Legendary Creatures Speak Up
From the name, the reader can get a basic understanding of what this storybook is about. In addition to being a fan of Greek mythology, I am also a long-time fan of cryptozoology. This story book consists of perspectives from four mythological creatures: Bigfoot, Mothman, dragons, and mermaids. Similar to the previous storybook, Legendary Creatures Speak Up also takes place on a show and the creatures give their encounters. When I first clicked on the storybook, I first read the “Human Encounters Convention” article and thought it clever and funny because we always hear the human side and never the creature side of the story. The convention definitely caught my attention and gave consideration to how the creatures must feel. In regards to the format of his blog, the writer could’ve done more with the page layout. When I think of cryptozoology, I think of mystery and the unknown.

Back to the Inferno
I clicked on this story to read mainly because of the word inferno. It reminded me of the book Dante’s Inferno and I wanted to see if it was. Truth behold it was! When I first read the introduction, I was a bit confused about the setting – was it on a show or what. The storybook follows the set up the book following a different character rather than Virgil. I greatly enjoy reading about Hell and what it could possibly be. The three rings of Hell that this book contained was Lust, Wrath, and Treachery. What I thought was interesting was that the writer used past and modern people such as Hitler and Hugh Hefner. The writer even used fictional characters such as Quagmire from Family Guy and the Incredible Hulk which really surprised me. What I appreciated about this storybook was this writer removed the seriousness of Hell unlike the first book. 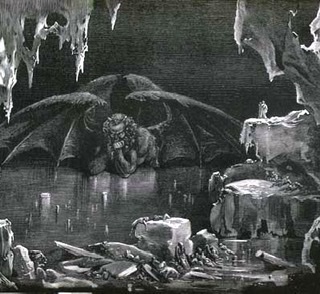 Ninth Circle of Treachery, Wikipedia
Posted by April May June at 3:19 PM

Email ThisBlogThis!Share to TwitterShare to FacebookShare to Pinterest
Labels: Week 1