Pandavana gave birth to three daughters at the same time
At the time of delivery, the ones In the room with her was a midwife, a doctor, and her grandmother.
The only family she truly had was her grandmother, who raised her since she was a child.

The grandmother and Pandavana lived on the edge of town, primarily depending on the forest for their resources. When the two came back from the hospital, they had three new additions to the household: Bellatrix, Celina, and Maricela.

The girls grew up without their father because he was too much of a horn dog. He ended up getting killed for sleeping with another man’s wife. Regardless of his absence, the girls never thought of him; they didn’t know any better.

From early on, Pandavana noticed the the three girls had a strong sense of wrong and right. Pandavana wanted to teach her girls everything and to protect them from making mistakes like she did growing up.

Pandavana was a strict instructor towards her daughters. Even though the training was rigorous, the girls quickly adapted and persevered. Initially, the girl’s desire to learn how to fight was fueled by their fear of rakshasas. At night, the grandmother would tell spooky stories about the rakshasas that lived in the nearby forest. Ever since, Bell Celia and Mari all wanted to be able to protect themselves.

The three girls grew up to be amazing and tough fighters. When the girls were children, they would do sneak attacks on their grandmother while she was “unaware.” Neither Bell, Celia, nor Mari knew that their grandmother was a master in fighting. Bell quietly jumped down from a nearby tree and aimed her leg at the grandmother. “I got her now!” thought Bell. When Bell thought she had her, the grandmother grabbed Bell’s foot and threw her to the ground. The grandma laughed out loud and asked “was that supposed to be a sneak attack? I could hear you guys from a mile away! Try again!”


While the three daughters were indeed beautiful, their most noticeable feature was their height. Compared to the town’s people, the Pandavana’s daughters were surprisingly short.

One day, the girls took a trip to the market to find a certain elixir. On their walk, a couple of annoying guys ran into the girls and tried to hit on them. Despite receiving rejection from all three, the men were persistent and soon they became aggressive. The men lunged at the girls thinking that they could over power them. However to the men’s surprise, the girls beat them all to a pulp which made them run away like a bunch cowards. One guy’s pride was completely tarnished that he swore to get his revenge.

Skip forward to when the girls finally became adults. Their mother, Pandavana grew very ill. No type of elixir or medicine could cure her. By the first week, she couldn’t stomach any type of food. By the second week, the mother lost a considerable amount of weight. By the third week, Pandavana couldn’t get out of bed or talk much. Watching their strong mother deteriorate, pierced the heart of the three daughters. Pandavana raised them all on her own as well as taught them everything they knew. None of the girls could stand watching such a strong and independent woman suffer.

Author’s Note
My story is based off of the rendition of the Mahabharata, The Five Tall Sons of Pandu which explains the come up of the five sons of Pandu. The Pandava’s were a royal family so the sons were taught in the art of war and were extremely knowledgeable.

In my version of the story, I did a gender and height bender. Call me cheesy but I think it’s a good idea. After reading several Indian epics, I’ve noticed that its the sons who learn how to fight. To be honest, having the daughters learn how to fight came from my own desires. I’ve always wanted to learn how to fight because I thought it was something practical and impressive. A specific trait that I wanted to portray in my characters was strength and power. The theme for my portfolio is courage, wisdom, and power. For Pandavana, I wanted to show the strength that a mother has and always has to have. For the three girls, I wanted to show their power through their fighting and their strength through the downfall of their mother.

Lastly, I inserted a picture of an anime character named Michiko Malandro because she’s one of the most strongest anime women I know. Despite being irresponsible and obnoxious sometimes, Michiko can always defend herself and fight others off. While her story isn’t like Pandavana’s daughters, they all have power and strength within themselves. 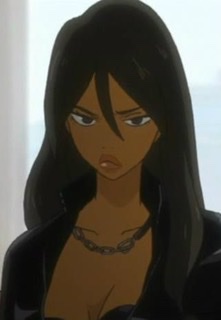