The Two Pigs
This story had an unexpected turn that was kind of confusing. One of the pigs said this poem causing everything in the world to listen? I wasn’t sure how his riddle was able to do all of that. I thought what was going to happen was that the two pigs found out they were going to be eaten and then run away. Also, the pigs didn’t say anything about it but the drunken grandma ended up betraying Cullatundila. If I was that pig, I would’ve tried to get back at the grandma. With these Jataka tales, I never know what’s going to happen. The story has to have a twist in rather than the expected. I really thought the pigs were going to escape through their window or door and runaway to the forest. Instead, they end up being treated as royalty. What an ending..

The Patient Buffalo
I have to say this one was my favorite story because of the lesson that’s taught. I loved how the buffalo stated that the monkey did not have a brain so why should he punish him for it. It’s like saying why should I waste my energy on someone else who won’t understand. It’s an important lesson to learn. I know for me I tend to waste a lot of my time on trying to convince the other person and in the end, it’s pointless. Thank you buffalo. 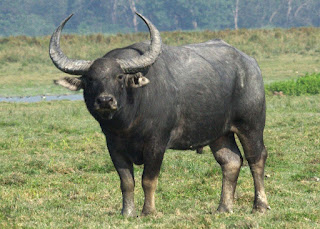