In the intro, the fact that people tried to kill Krishna as a child and prevent his growth reminded me of Hercules the Disney version. Demons tried to kill Hercules when he was a baby but failed to. For episode 1, I heard stories similar to the part where the King wanted to slay the baby that was going to kill him. I was surprised when the mother transferred her baby to her husband’s first wife. I didn’t think that would happen but that was a good save! I liked how two huge snakes came to help the dad cross the Yamuna and I thought it was funny when the dad realized that the water was only waist deep. Gypsies were the people of Nand, the cow herd. So if I’m understanding this correctly, the mother transferred her seventh baby to another woman so that she could give birth to him away from the prison. Then when the first mother got pregnant, the prison guards thought that it was her seventh baby but in fact her eight baby. Now the father is bringing back the daughter. What’s going to happen to the daughter when he arrives at the prison? Why is he taking her back there when the king is just going to kill her? Oh now I see, yes the king’s mistake was judging the baby because it was a girl. So now I’m even more confused. Did the mother give birth to two gods? Durga and Krishna?? The slaughter of newborn babies reminds me of a book from the Bible. I think it was in Egypt. I laughed when baby Krishna was sucking everything out of the bad woman (hate, powers, milk, etc.) That’s what she gets! 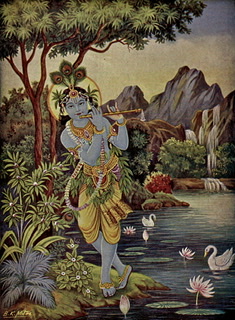 Krishna
Source: Wiki
Posted by April May June at 4:22 PM