Despite being the wife, Kaikeyi doesn't care about the death of her husband nor her other sons. Throughout the reading, I noticed that men are notably nicer towards women. For example, maybe it's because she was his mother, but Bharata would not kill his mother despite the wrongdoing she's done. Shatrughna and Bharata both knew that Rama would not be happy if he finds out what they did to a woman. I might change how Kaikeyi received zero punishment. Bharata's comments about parents are interesting to me. He says that a man's allegiance to them is temporary. A man enters and leaves this world alone. I might include Bharata's analogy in my future story.

Later in the story, Sita was kidnapped by Ravana while Rama was trying to catch the golden deer was. The demon’s plan was good so I think I might keep this part of the story. The sister of Ravana, Sherpanakha wanted Rama badly so she tried to kill Sita. There’s not much I want to change because I enjoyed reading this part the most. 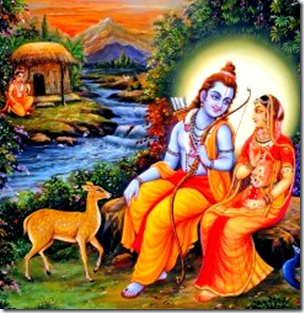 The Golden Deer, Rama, and Sita
Source: Academy
Posted by April May June at 12:49 PM