I’m reading Part D of the Mahabharata and there’s a big war happening. People are dying and there’s a lot of hate being passed around. One idea that I had is I would change the story so that instead of actually fighting, everyone sits down and talk about their feelings. The characters will talk their problems out like adults and resolve their conflicts.

Here’s my second idea: Virtual reality. Earlier in my posts, I said that I wanted to make these Indian Epics modern. So my idea is to make the fight take place in virtual reality then, everyone can just leave and live like nothing happened. Their anger and frustration is taken out but no one gets hurt!

Further into the reading, I read that Ghatotkacha ends up dying which made me. I enjoyed reading about him because he was a half demon and half human. He reminds me of my favorite anime character, Inuyasha, who is also a half breed. I would change the story so that Ghatatkocha is not slain. I just might change the entire story and have him fall in love with a mortal woman. 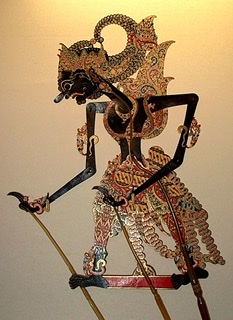