Wikipedia Trail From Edgar Allan Poe to The Kraken

Edgar Allan Poe
While going through social media, I read Edgar Allan Poe and decided to learn more about him. He was one of the first people to live off of his bookings and writing which was significant at his time because it was uncommon. I also learned that he married his 13 year old cousin, Virginia Clemm. My high English teacher taught about Edgar Allan Poe’s work but I never knew that he was involved in incest. Furthermore, Poe’s works influenced many authors such as H.P. Lovecraft.

H. P. Lovecraft
I’ve seen his name so many times that I wanted to learn more about him as well. He’s famous for his supernatural horror stories such as “The Call of Cthulhu” and “At the Mountain of Madness.” I came across Lovecraft before and have been wanting to read his books for quite some time now. What’s ironic is that H.P. Lovecraft’s stories weren’t popular at their time of release and he was basically unknown during his career. However, several years after his death, he is seen as one of the most significant 20th century writers of supernatural horror writing.

The Call of Cthulhu
This title caught my attention because I’ve heard of Cthulhu but never knew exactly what it was. Reading the article about this book, I now know that Cthulhu is a huge sea creature that is supposed to sleep at the bottom of the ocean forever until it awakens at an apocalyptic era. I find stories like this extremely fascinating. I love learning about the unknown and the ocean so when the two genders are combined, it’s the perfect story for me.

The Kraken
Now, the infamous story of the Kraken has always interested me because it’s terrifying to think that a creature like that might exist. Nowadays, it’s more likely that the Kraken was just based on sitings of the giant squid or octopus. I learned that the story originated from Scandinavian folklores. Based on Norse sagas, the terrifying creature lives in the seas around Norway and Greenland. 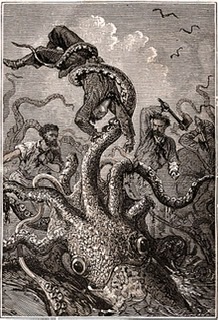 The Kraken
Source: Wikipedia
Posted by April May June at 2:02 PM