I noticed that the prince paid attention to detail. He noticed that the palace roof was made out of wood and other materials that can easily burn as well as the oil. I appreciate characters who are aware of their surroundings. I enjoyed reading how the skillful miner dug a tunnel for the Pandava’s escape and how they were able to escape. What stayed with me was how a violent wind spread the fire to the lac palace causing the low caste mother and five sons to die. Then, what’s even worse is that their charred bodies made everyone think that the Pandava’s died.

When the sister rakshasa went to Bhima, I didn’t think what she said was smart. She was very quick to tell Bhima about her brother and that he should let her be his servant. I think if she chose her words carefully, then Bhima might have considered. I’ve also noticed that many women rakshasas fall in love with mortal men. The fact that the rakshasa and Bhima ended up together really surprised me because usually demons don’t have a good ending. The story talked about their marriage too quick so if I were to rewrite it, I would spend more time talking about their time together. I also found it funny when their son was named Ghatotkacha, which means pot-headed. They named their son that because he was bald, but the meaning does not make me think of baldness. I also thought it was sweet how the demon was honest; she just wanted to be with Bhima and begged for his family to convince him to marry her. 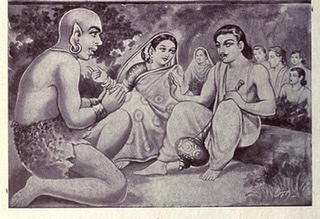 Bhima, Hidimba, and Ghatotkacha
Source: Wikipedia
Posted by April May June at 12:29 AM