In episode 9, having the man whisper a mantra in her ear was pretty cool. The mantra was so that she could summon any god she wanted. Dang that’s crazy how the sun god left a kid in her arms. Putting the kid in the basket and sending him down the river reminds me of the story of Moses. The point of the Mahabharata is to show that actions are a function of what happened before it as well as after it. That’s insane what happened to Pandu. The fact that he shot a couple who were for some reason having sex in the woods just blows my mind. I don’t think its Pandu’s fault nor the couples fault; just bad timing. Now Pandu has a curse. The curse is even worse. He can’t ever have sex or else he’ll die! That’s a terrible curse, I’d be sad as well. Curse you hermit! What’s even crazier is that the mantra is not only so that she can summon any god but to also bear the child of ANY GOD - What a steal! 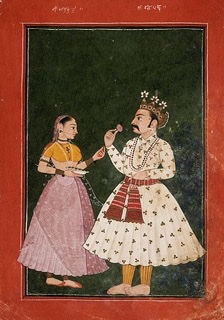 Pandu and his wife Kunti
Source: Wiki
Posted by April May June at 7:35 PM