I was inspired by Daupradi’s Swayamvar where the princes who wanted her had to do a difficult task in order to win her. Very materialistic if you ask me. My story is a commentary on the difficulties being a woman. My inspiration for the princess came from an original story called The Tale of Princess Kaguya. Princess Kaguya made the noble men who were in love with her to get her the mythical objections that she asks. I wanted to do the same thing here but with less materialistic tasks.

Princess Ruga was the only daughter of a powerful king who ruled the nearby lands. She was a very beautiful young lady but she was very lonely. Her heart was locked in cage because the men in her life didn’t know how to treat her right. A man who she truly loved completely broke down her walls only to leave her for another wealthier princess. She had magical powers where she could Astro project herself to other places. She could see and feel the injustice being brought onto pure and loving women. Her heart bled for women that were suffering because of their abusive relationships.

On the night of a full moon, she projected herself into the minds of every man who did wrong in their lives. She sent them a message saying that she will hold a competition where someone can win her as their wife. She further states that whoever wins her shall be rewarded with a life time of royalty. Throughout the night, several men woke up with a smile on their face and greed in their hearts.

A few days later, the king announced that men around the kingdom shall participate in a Swayamvar to win his daughter. All the men quickly put on their best outfit and combed their hair. Many lied to their wives by telling them that they’re going to run errands. Many wives just replied by rolling their eyes.

At the castle, men of all sizes and age were there and ready to show case themselves. The princess came out and announced what they all had to do.

“Hello everyone. I am Princess Ruga. I will now announce the three tasks that you all must accomplish. First, you must feel what a mother feels. Second, you must do what a mother does. And lastly, you must think how a mother thinks. You have by the end of the month to do all three. In the end, I will be the one to determine yourself. No one shall lie, for I will see the truth.” Princess Ruga wanted to laugh so bad but she had to keep her silence. In her head she thought “none of these men are going to pass my tasks.”  To make sure that these men were taught a lesson, Princess Ruga cast a spell on all of them. That night all the men turned into women while the all the wives turned invisible.

The next morning shouts and screams were heard through out the neighborhoods. Men who turned into women screamed as they looked in the mirror to see that they had become a women. Some men ended up turning into pregnant mothers. Without their knowledge, the spell would last for the entire month. Their wives giggled watching their husbands freak out. “How splendid, now they will have to understand what its like to be a women in a world like this.”

The men who were now women, all had to do tend to the house and children because their wives were missing. They were forced to go grocery shopping and cooking. A lot of them didn’t know how to and became frustrated by the first day. The kids became wild and didn’t listen to their dad-mom. The men spent a lot of time cleaning the house too. By the time they were done by with the first chore, they were already tired. “Man, I still have to clean the rest of the house”, one of them said. At night, some men-women actually went out to the bars to drink one up. As some was walking, men who didn’t turn into women, cat called them and even sexually harassed them. When some men-women got into the bar, all they got were mean and lustful looks from the men. The bartender asked them what the hell they were doing at a place like this at night. “You either go home right now or be in danger later” warned the bartender. Despite his warning, they all stayed and drank.

Later that night, horrid and inexcusable things happened. Let’s just say some of the men-women learned the hard way of being a women. The next morning, a couple of them woke up and couldn’t walk because their bodies ached with pain. A few had bruises and black eyes.

One of them was actually a pregnant mother who went into labor in the third week of the month. He-she was scared because she was by herself excluding the nurses and doctors. The men-women experienced a pain that was so unbearable and excruciating. He-she wanted this baby out quickly but it took some time for the baby to come out. He-she pushed and pushed till their veins popped out but nothing happened. When the doctor decided that he-she could not push the baby out, they decided to cut her open. He-she really could not believe this was happening and thought, “Jesus is this what mothers have to go through?”

Some men-women ended up dealing with their controlling fathers. In one argument, the father told his daughter (the men-women) to be quiet or else. In some arguments, this resulted in the father beating the daughter. After some time, the men-women learned what they must say and what they should not do.

The day before month finished, Princess Ruga decided to see how much these men have changed. Princess Ruga had many powers but the most important was that she had the ability to look deep into someone’s soul and determine what kind of person they are. She can could see what troubled the person and what the person yearned for. She obtained these powers after she had her heart broken by the love of her life. A goddess felt her sadness through the coldness of the night. The goddess seeped for the princess in which her tears formed a small pond. The goddess told the princess to submerged herself in the pond for she will be given celestial powers.

The day before the end of the month, Princess Ruga astro projected herself into the dreams of the men-women. She looked back at their past experience and saw they had felt. The next day, all the men-women turned back into men. At the castle, the men returned with their hearts heavy with guilt.

Princess Ruga said “Good morning to you all. I have witnessed your journey since the first time you came. I hope that what you experienced helps you all understand the difficulties of being a woman in today’s time. I hope that you will be better husbands and men.”

At home, the wives were back to their usual routines. When the men returned to their wives, they all greeted them with passion. They all missed their wives very much. Many of them apologized for treating their wives so poorly and not caring enough. “Thank you for all that you do my love.’ 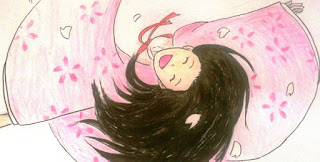