I thought it was so sweet that Karna stayed silent despite being stung by a scorpion so that his teacher wouldn’t wake up. But then, I thought it was really dumb for his teacher to not believe his own student. Like is you’re pride so big that you refuse to believe an honest pupil? That was disheartening because it was his teacher that banned him. Another detail that I liked was when the video talked about the weapons that they used. Learning about the different weapons and their functions were so cool. For example there was one weapon that was able to destroy an entire world. Unbelievable. I was happy to see that Karna won the title and kingdom. Ever since, he got rejected by every teacher so seeing him do well is a satisfying feeling. I remember reading about the plot towards the Pandava’s. It’s scary but also brilliant to make a house out of flammable material. Thank goodness for the people who told the Pandava’s. 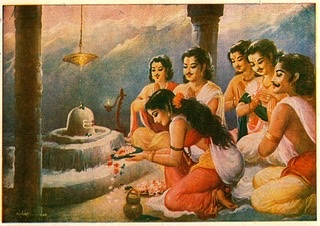 Daurapdi and the Pandava’s.
Source: Wiki
Posted by April May June at 8:06 PM